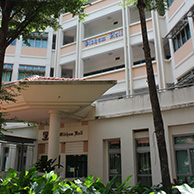 William Fitzjames Oldham came to Singapore on 6 February 1885 as a young missionary to establish a Methodist Mission. As a gifted teacher, he immediately saw the need for a young society to be educated and determined to set up a Methodist school instead. By 1886, enough funds had been raised and on 1st March 1886 Reverend Oldham and his wife established the Anglo-Chinese School in a shop house along Amoy Street. It was a school by day and a boarding school by night for students who needed boarding and lodging facilities. The ACS school building continued to house missionaries and young boarders until 1888, when boarders were relocated to a separate boarding house in Oldham Lane known as Bellevue, located near to the present Plaza Singapura off Orchard Road. In 1896, the boarding house was demolished and rebuilt in 1897. In 1902, the boarding house was renamed Oldham Hall in honour of Bishop Oldham. On 14 December 1926, Oldham Hall moved to Dunearn House at Barker Road. Since then, it has been rebuilt twice, once in 1985 and most recently in 2001, together with the redevelopment of the Anglo-Chinese School (Barker Road) Campus.

The current ACS Oldham Hall reopened at the end of 2002 as a co-educational boarding school for students from ACS as well as other nearby schools. We also accept international and foreign students studying in other local schools and international schools. It enjoys close proximity and spiritual affinity with Anglo-Chinese School (Barker Road) and Barker Road Methodist Church.

Be the premier boarding school that seeks to provide a safe and secure environment for our boarders, while maximizing their potential through the sharing of Christian values.

ACS Oldham Hall is run based on the 5 basic core values (i.e. Integrity, Responsibility, Respect, Humility and Self-Discipline). These are the same values that we impart to our boarders as they live together in a community.

Champion at the Inter-Hostel Challenge organised by the Ministry of Education (MOE), 2018

First Runner-up at the Inter-Hostel Challenge organised by the Ministry of Education (MOE), 2013

SPARKS Award given by the Ministry of Education (MOE), 2013

Most Improved Hostel conferred by the Ministry of Education (MOE), 2013

‘Most Creative Room’ Award given to the girls of Room 514, in the recent MOE Inter-Hostel Competition

We would love to show you around. Tell us when is your preferred timing and we will get in touch with you.

Life at Oldham Hall is interesting… You can’t get bored. My fellow boarders and the staff are very friendly and I enjoy the friendships forged here. We study hard and have fun at the same time. Besides hall-wide events like Orientation Games or Founder’s Day Challenge where we compete with one another in sports and games, we also have mini gatherings with our floor mates and Assistant House Masters/Mistresses (AHMs).

I was struck by the warmth and sincerity of all members of your community and am glad that some of our Nexus students are boarding with you. I can be certain that they will have an excellent support network from your staff and their families.

Even though it has only been a year, we feel that Brandon has grown to become more matured, responsible and independent. In particular, my wife and I are heartened that his study attitude has improved tremendously. He takes responsibility for his studies and is able to manage his time well.

When he shared with us that he wanted to run for the Students’ Council this year (2014), we supported his decision (despite the fact that he’s taking his O level exams this year) as I think such leadership opportunities are just as important as academic pursuits, if not more. Watching him strategies on getting votes, working his goals and plans for the hall has provided a refreshing perspective that our son has matured!

I’m very thankful & grateful for your care and help shown in these formative years of Ge Tao… We can see him growing and progressing well.

The opportunity to live with people of different nationalities – peers and Assistant House Masters/Mistresses (AHMs) was an invaluable experience. Hanging out with friends in the Common Room, gathering to celebrate birthdays, sitting in the Courtyard at night and playing some music, or just simply chatting over dinner were the little things that made my 4 years in Oldham Hall fun and fulfilling.

Your Performance Report (BPR) is very comprehensive and gives detailed description of the child’s learning and life in Oldham Hall… It is very helpful and gives me a good understanding of my child’s overall situation. Thank you very much!

ACS (International) has a very close working relationship with ACS Oldham Hall. We are very pleased with the quality of the pastoral care that Oldham Hall provides our international students. The students thrive in the supportive and structured environment, and this impacts positively on their achievement at our school. We highly recommend Oldham Hall to any prospective parent and student.

Live chat is not available right now. But you can send us an email and we will get back to you ASAP